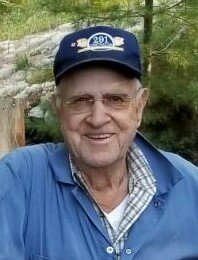 DAVID, Morley passed away peacefully at his residence in Avon on Monday, October 10, 2022 in his 87th year. Beloved husband of Peggy (Johnson) David for 62 years. Loving father of Maria David (John) of Avon, Melanie David of West Haven, Connecticut and Marc David (Nikki) of Springfield. Dear grandfather of Izabella Davidson (Jordan) and proud great-grandfather of Jace and Ellie. Predeceased by father Alfred, mother Mabel, step-mother Annie, brothers Francis and Joseph. Morley was born in Parry Sound and spent his young years in a very isolated little, lumber mill town called Pickerel. The summers on the river were beautiful and the winters were very cold. Morley became a good business man and a good boss. Hockey was a very important part of his life, playing well into his seventies, then switched to curling and he also played ball. He was a great husband, father, grandfather, great-grandfather, uncle, brother-in-law and friend. He taught us valuable lessons by his example and life is changed by his absence. Visitation at the H. A. Kebbel Funeral Home, Aylmer on Thursday 5-8 p.m. The funeral mass will be held at Our Lady of Sorrows R.C. Church on Friday, October 14, 2022 at 10:00 a.m. Interment, Queen of Peace Cemetery. Donations to Our Lady of Sorrows R.C. Church, The LHSC Cancer Centre or Belmont Minor Hockey would be appreciated. Share memories or condolences at kebbelfuneralhome.com

Share Your Memory of
Morley
Upload Your Memory View All Memories
Be the first to upload a memory!
Share A Memory