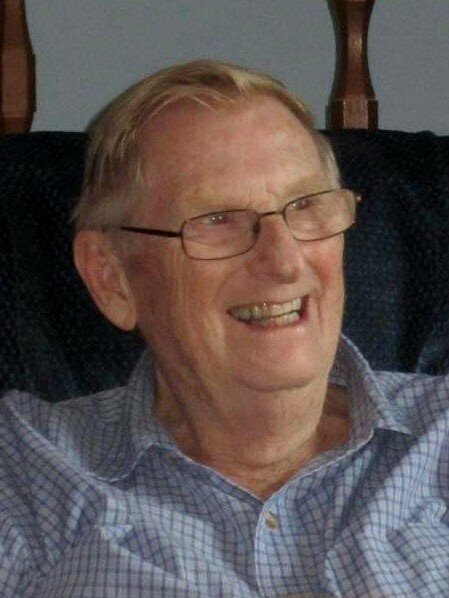 Due to COVID-19 restrictions, friends who wish to attend the visitation may call the funeral home at 519-773-8400 between 9am-5pm. (Masks and social-distancing are required) Visitation will be held at the H.A. Kebbel Funeral Home on Monday, February 14, 2022 from 2-4pm and 6-8pm. The Funeral Service will be held at the funeral home on Tuesday, February 15, 2022 at 1pm. The service will be available for livestream on our website.  Interment will be at the Aylmer Cemetery.

Thomas Alfred Barry Pinch, age 89, passed away on Thursday, February 10th, 2022 at St. Thomas Elgin General . He was born in Collingwood on to the late Tom and Anne (Weatherall) Pinch. On he was united in marriage to Vivian Laur. They were married for 67 years until Barry’s death.

Barry grew up in an air force family, living in Collingwood, , NS; ; ; ; and . His memories were full and varied. He rode his bike around Dartmouth seeking out markings on the walls of buildings from the 1917 Halifax explosion; lived in Moncton just long enough for his brother to be born; talked to the girls in Montreal in French; worked as a short order cook on the base in Clinton; and was thrown into a ditch by a snowplow while hitchhiking from Clinton to Aylmer to see Vivian. After High School and a short detour at a bakery in , he went to work at the Aylmer PUC, retiring in 1992 after almost 40 years, including 20 years as the General Manager.

Barry was always active in the community. As a youth, he loved playing sports, especially basketball and baseball. He stayed involved after high school, first playing baseball then moving on to coach both baseball and hockey. In addition, he was an active member of the Kinsmen for many years, and participated in various regional or provincial water and electric associations and boards. Barry was especially proud of the 25 years he was a member of the Aylmer Volunteer Fire Department.

He enjoyed working with his hands and never lost the attitude learned growing up of don’t pay for something you can do yourself. There were many projects he took on but examples spanning the progression of his life included actually building the first family home on Elk Street; installing the electrical at a cottage near South River in return for two free weeks of family use every July; building an in ground swimming pool for Viv at their new home; then, in retirement turning to building furniture and toys for his grandchildren. Barry always looked back with thankfulness, pride and fond memories on the assistance friends and families provided on these projects.

In retirement, Barry and Vivian spent time traveling in their RV, wintering in and visiting their children in , , and . The grandchildren loved to see the motor home pull into the driveway as it meant their grandparents were visiting for a few weeks. Even after retiring as RV owners, they continued to travel to visit family as long as they could.

Barry is survived by his wife Vivian, Extendicare of Port Stanley and children Deb (Tom) Benner of St. Thomas; Wendy (Dougal) Hines of Quesnal BC; Terry (Kim) Pinch of Fox Crossing, Wi; and Cindy, (Chuck) Guillas of Grande Prairie, Alberta. He is also survived by his grandchildren Melissa, Laurie, Justin, Matt, Katie, Kirsten, Sean, Keenan and Andrea. He was preceded in death by his parents, his brother Ron, mother and father in law, Ruby and Delmer Laur, and his son Mike.

Donations to the Elgin Alzheimer Society would be appreciated. Share memories or condolences at kebbelfuneralhome.com

The family would especially like to thank the staff at Metcalfe Gardens for the wonderful care and support they provided Barry in his last years.

Livestream will be available to view at the following link: Barry Pinch

Share Your Memory of
Barry
Upload Your Memory View All Memories
Be the first to upload a memory!
Share A Memory