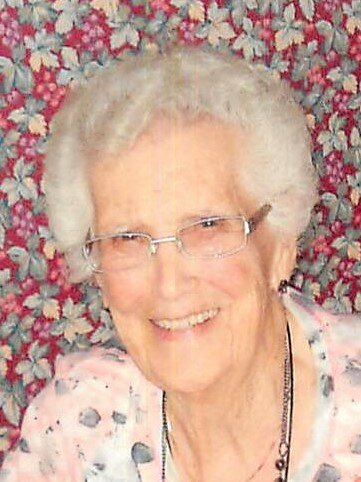 McWhinnie, Lena of Aylmer passed away at Chartwell on Saturday, November 6, 2021 in her 99th year. Beloved wife of the late John(Mac) McWhinnie(1998). Dear mother of John McWhinnie(Vicki) of Ottawa. Mother-in-law of Nancy McWhinnie of Kitchener. Predeceased by her son Craig McWhinnie(2003) and brothers Kenneth, Keith and Craig. Survived by a brother Ronald. Loving grandmother to Margaret Stirling(Lee), Jason McWhinnie and Rory McWhinnie. Great-grandmother to David and Jenna Stirling and Evan McWhinnie. Born in Norfolk County, Ontario on June 8, 1923, daughter of the late Raymond and Hattie(Hellyer) Anderson. Lena attended the Villa Nova Public School, Waterford High School and Robinson Business College. She moved to Springfield in 1944 to a farm on Century Line. Lena was a member of the Springfield St. John’s United Church and a charter member of the United Church Women. Cremation has taken place. A graveside service will be held at a later date. Interment, Greenwood Cemetery in Waterford. Donations to the St. John’s United Church, Springfield would be appreciated. Lena's family would like to thank the loving and caring staff at Chartwell, Aylmer for providing care and companionship to Lena. Share memories or condolences at kebbelfuneralhome.com

Share Your Memory of
Lena
Upload Your Memory View All Memories
Be the first to upload a memory!
Share A Memory