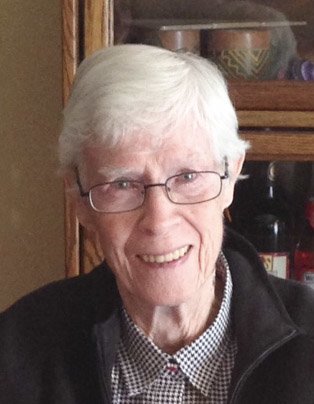 With the same dignity and strength that she exhibited everyday of her life “Joan” Alice Rosina (Elvin) Jordan died in her 100th year on December 19, 2020 at St Thomas Elgin General Hospital with family by her side.

She is survived by her three daughters, Lucille Edmondson (Gary) of Windsor, Lauran Timlin (James) of Roatan, Honduras, Kelly Cornelissen (Dave Cooper) of Ingersoll and four grandchildren, Elizabeth, Tessa, Sean and David. She shared with her grandchildren a love of games, a keenness for current events and her can do attitude. She was predeceased by her father John Elvin, her mother Alice Elvin and her brother John Elvin, all of Bromley, Downham, Kent, England.

During the war Joan worked for the Royal Navy as a clerk and had many stories she liked to share about the challenges and excitement of surviving the war in London, England. Joan arrived in Canada as a war bride and made Aylmer her home for the rest of her life. Originally from London, (Shoreditch) England she was well known as an accomplished seamstress and prolific knitter. Her interest in fashion and style was always part of her conversation.

After many years at Singer Controls in St Thomas, she filled her life with a wide variety of activities. In her retirement she kept herself very busy as a determined volunteer delivering Meals on Wheels and managing the Tuck Shop at Terrace Lodge. She was a keen participant in Line Dancing and never missed completing the crossword in the London Free Press.

We will remember her as an independent, determined, creative and intelligent individual who contributed greatly to the lives of her family and others close to her. Share memories or condolences at kebbelfuneralhome.com

Donations in her memory may be made to Terrace Lodge Auxiliary or a charity of your choice.

To send flowers to the family or plant a tree in memory of Joan Jordan, please visit Tribute Store

Share Your Memory of
Joan
Upload Your Memory View All Memories
Be the first to upload a memory!
Share A Memory
Send Flowers