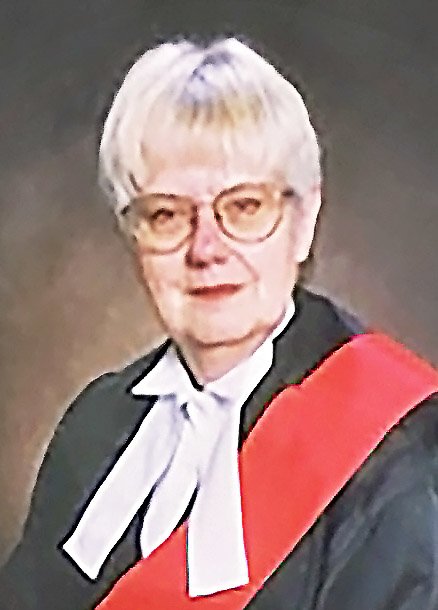 Roberts, Marietta Lola Doreen of Aylmer passed away at St. Thomas Elgin General Hospital on Sunday, October 4, 2020 in her 78th year. Loving sister of Thomas Lynn Roberts(late Valerie), Evangeline Little(Ray) and David Roberts(Marie). Loving aunt to Richard, Laurie, Gwen, Lynne, David, Elena, Darryl, Emily and families. Also survived by a number of great-nieces and great-nephews, Uncle Sam(Mary Anne) many cousins and close friends. Marietta made great effort to and enjoyed gathering with her friends often.  Marietta was born in Yarmouth Township near Sparta on January 9, 1943, daughter of the late Thomas Yarwood Roberts and Mary Marguerite(Lamb). She was raised on and helped with the Roberts farm. Marietta studied at many institutions and received a B.A. at the University of Western Ontario, a Teaching Certificate from the Ontario College of Education and her LLB from Dalhousie University. She taught at Alma College for three years, and then practiced law in the Elgin County area from 1971 to 1987.  She was a founding member of the Ontario Child Representation Program, and served as the Acting Crown Attorney for Elgin. Marietta also chaired the Elgin County Board of Education. She was elected to the Ontario Legislature as the MPP for Elgin County in 1987. She served as Deputy Chair of the Committee of the Whole House of David Peterson's government for the next three years, and was Chair of the Government Caucus in 1988 and 1989. She served as Vice-Chair of the Select Committee on Constitutional Reform from 1987 to 1989 and as Deputy Government Whip in 1989-1990. In 1991, Marietta was appointed as an Ontario Court of Justice judge.  She was then appointed as Associate Chief Justice Judge for Ontario and Coordinator of Justices of the Peace from 1995 to 2001. Upon completion of that position, she continued as a Judge of the Ontario Court from 2001-2018 both in Woodstock and as a per diem judge that took her wherever she was needed including many trips to Northern Ontario. Marietta was a philanthropist and a great supporter of local museums. She was involved in the Sparta Historical Society, Aylmer Ladies Breakfast Club, Ducks Unlimited and one of the founding members of the FOSLs.  Marietta was an avid traveller with her friends.  Marietta's mission was to serve.  She will be greatly missed by all who knew her. A private family service will be held. A celebration of life will be held at a later date.  Donations to the St. Thomas Elgin General Hospital Foundation, London Health Science Centre or charity of choice would be appreciated. Share memories or condolences at kebbelfuneralhome.com

To send flowers to the family or plant a tree in memory of Marietta Roberts, please visit Tribute Store

Share Your Memory of
Marietta
Upload Your Memory View All Memories
Be the first to upload a memory!
Share A Memory
Send Flowers