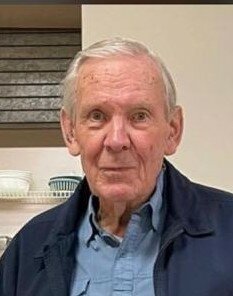 Krahn, Gerhard of Aylmer passed away at London Health Science Centre-University. He was born in Chihuahua, Mexico, on March 30, 1939, to the late Peter and Katherina (Remple) Krahn. He was baptized into the Old Colony Mennonite Church in the spring of 1962, and was married to Margaretha Loewen on September 23, 1962. He was a dedicated and faithful member of the Calton Conservative Mennonite Church. The Lord saw fit to call him home to be with Him in his 84rd year on November 24, 2022. Gerhard Krahn was predeceased by his beloved wife, Margaretha (Loewen) Krahn and will be missed by his children, George Krahn and wife Mary of Leamington, Tina Krahn of  Aylmer, Margaret Fehr and husband John of Aylmer, Trudy Bergan and husband Herman of Chihuahua, Mexico, Nettie Martin and husband Steven of Eden, Peter Krahn and wife Judy of El Paso, U.S.A., Jake Krahn and wife Janet of Aylmer, John Krahn and wife Greta of Gonzalez, Mexico, Mary Kauenhofen and husband Ed of Wheatley, Annie Kauenhofen and husband Walter of Aylmer, Dave Krahn and wife Violet of Bancroft, and Eva Dyck and husband Peter of Bancroft. Also survived by 50 grandchildren, 33 great-grandchildren, three brothers, one sister, and many nieces and nephews.  Visitation at the  H. A. Kebbel Funeral Home, Aylmer on Sunday 2-4 and 6-8 p.m.  The funeral service will be held at the Bradley Street Church of God on Monday, November 28, 2022 at 1:00 pm.

Share Your Memory of
Gerhard
Upload Your Memory View All Memories
Be the first to upload a memory!
Share A Memory