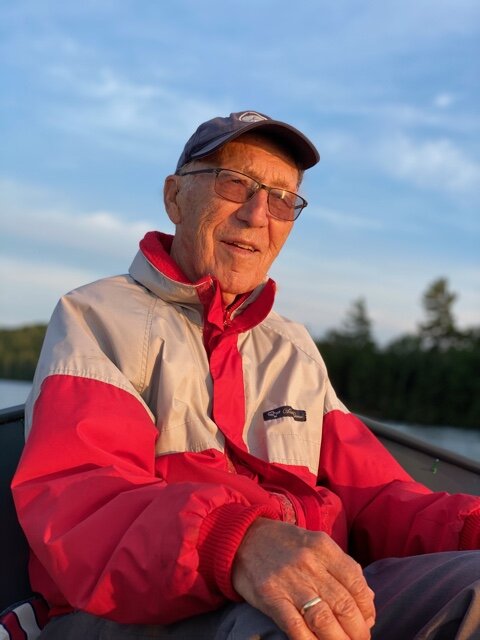 With his family by his side, Ted passed away peacefully on October 2, 2022 at Maple Manor, Tillsonburg in his 89 th year. Son of the late Alice and Robert Luscher of Thedford, Ted is survived by his wife Evelyn (nee Tremaine) and his sons, Dave and wife Jan, and Ross and wife Denise. Cherished “Grampie” to Heather and doting “Papa” to Chelsea, beloved brother to Beverley Delmage (late Robert), brother-in-law of Irene Cudmore (late Robert), Keith Tremaine (Doris) and Marilyn Allen (Jerry). Fondly remembered by many nieces, nephews, and cousins. He was a treasured husband, father, son, brother, grandfather, uncle, cousin, and friend.

Ted was a lifelong teacher and taught us all the meaning of hard work, commitment and duty to community. Ted started his career in the Royal Canadian Air Force and learned to fly the historic Harvard aircraft. He later switched career paths and became a secondary school teacher, teaching thousands of students during his 34 years at East Elgin Secondary School, where he was once named “Elgin County Teacher of the Year.” He specialized in teaching machine shop, worked in the guidance department, and finished his career by establishing a successful Co-Op Education program. He went the extra mile to make sure that students could get to their Co-Op placements, even if it meant driving them himself.

Ted always had a project (or four) on the go. He enjoyed building with wood, be it canoes, cabinets, or the family cottage. He and Evelyn oversaw the building of two lovely homes – their first in Aylmer and second when moving to Tillsonburg at the young age of 79.

Ted enjoyed travel, and together with Evelyn enjoyed many cruises and trips abroad, notably to Switzerland both with Dave and Ross, and later with Heather and Chelsea. He was endlessly proud of his Swiss heritage, and maintained regular contact with cousins in Switzerland.

Ted enjoyed sharing his time and talent with many community organizations including restoration work with the Canadian Harvard Aircraft Association, running a canned food drive for the Christmas Care Program in Aylmer, and varied roles on the board at St. Paul’s United Church Aylmer. He was honoured with the Town of Aylmer “Senior of the Year Award” in 2002 for all his contributions. He was generous with his time, attention, and wouldn’t hesitate to lend a hand to anyone in need.

Ted will be greatly missed.

Special thanks to the second-floor staff at Maple Manor for the care that they showed Ted over the past several months, and especially in his final few days.

For those who wish, in memoriam donations can be made to the Canadian Harvard Aircraft Association (Tillsonburg), Aylmer Area Community Foundation, Victorian Order of Nurses – Oxford, or a charity of your choice.

Share Your Memory of
Ted
Upload Your Memory View All Memories
Be the first to upload a memory!
Share A Memory