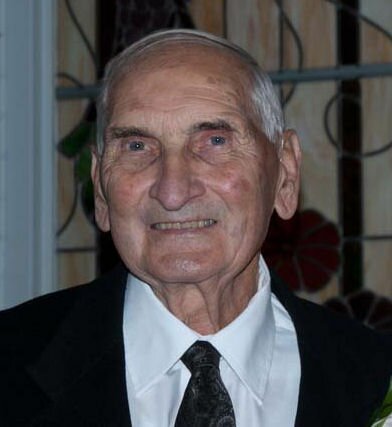 At Sakura House, Woodstock on Thursday, April 21, 2022 Russell Kenneth Summers. Beloved companion and friend of Rosaland for 48 years. Dear dad of James “Jimmy”, Judy(Johnnie) and Tim(Rita). He was the proud grandpa of numerous grandchildren and great-grandchildren. He will always be remembered by Bradley and Matthew. Dear brother of Esther Gray and Carl Summers(Doris). Brother-in-law of Marie Summers. Russell was predeceased by his parents Kenneth and Gladys(Hodson), brothers Lyle and Harold, brother-in-law Jim Gray and sister-in-law Freda. He will be missed by many nieces and nephews.

When Russ purchased his home in Aylmer, there were renovations to be done. Three kids to keep an eye on was an impossible task. To solve the problem, he bought them a mini bike and turned them loose in the yard. The motor was never cool, problem solved!

Over the years, Russell wore many hats. At one time, he owned a fleet of dump trucks, a battery supply outlet, opened the first nursing home in Aylmer and for 20 years, worked beside his brother Lyle, Aylmer Tire. He was a talented carpenter and was pleased to have helped all three of his kids renovate their homes. Russ worked hard and played hard. He loved antique cars and restored many in his shop when we lived on highway #3. He also loved new cars. There was one incident of him leaving home in the morning to get a quick oil change only to arrive home at suppertime with a brand-new vehicle. And only Russ would change 3 lawn mowers in 1 year. If he kept the same vehicle for more than 12 months the neighbourhood became concerned. He also loved his boats and the time spent at Turkey Point. One particular boat trip had been planned to cross the lake to Sandusky, but never happened. Due to a storm that blew in we made it only as far as Erieau. By the time we made it back to Port Bruce, a wonderful story had been concocted about what a great time we had. To this day, only a few of us know the true story.

But, most of all, Russ enjoyed playing cards with close friends. There may have even been a loonie or toonie change hands. He had many escapades with his buddies Fuzz and Doug. He enjoyed going to the sugar bush to “help” Bill boil maple syrup. He loved going to the woods with Stu to skid out logs with the horses. He was a NASCAR fan and for the last few years followed the Blue Jays; he liked Rowdy.

Russ had served 10 years on the Aylmer Fire Department and was still a honourary member. He was a past member of the Kinsmen Club. He and Rosaland received the Citizen of the Year Award in Burford in 2014; he was “adopted” by Holy Trinity Anglican Church in Burford and was a member of the Burford Township Historical Society.

As per Russ’ wishes, cremation has taken place. His immediate Family will get together this summer to remember, reminisce and tell stories. Donations in Russ’ memory to National Service Dogs (1286 Cedar Creek Rd. Cambridge Ontario N1R 5S5) would be greatly appreciated. Arrangements have been entrusted to H.A. Kebbel Funeral Home, Aylmer. Share memories and condolences at kebbelfuneralhome.com

Share Your Memory of
Russell
Upload Your Memory View All Memories
Be the first to upload a memory!
Share A Memory