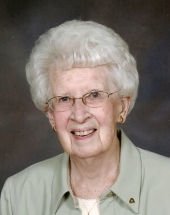 Hoshal, Grace Irene of Chartwell Home, Aylmer passed away peacefully at her residence on Saturday, August 7, 2021 in her 102nd year.  Beloved wife of the late Walter Clayton Hoshal(1978). Step-mother to Helen Corrigan (Terry). Grandma to Christine and Lisa.  Great-grandma to Satya and Tenzen. Predeceased by her brother Alfred Woolley.  Also survived by a niece Diana Brethour (Jim) and a nephew Alan Woolley (Collette).  Born in St. Thomas, Ontario on December 11, 1919, daughter of the late Harvey and Carrie (Huson) Woolley. After graduating from the University of Western Ontario in 1952, Grace enjoyed 36 years as a teacher and will be remembered by her students at Summers Corners Public School. In 1965 she received a service medal from the Red Cross Society for having a Junior Red Cross Unit in the Classroom for 25 years. In 1977 she was made an honorary member of the Elgin Women Teachers' Association for excellence of participation in, and contribution to, the progress of the Elgin Association. She received a Volunteer Service Award from the Province of Ontario and was named Aylmer’s Outstanding Senior Citizen. Grace was a member of St. Paul's United Church, the Terrace Lodge Auxiliary, the Retired Women Teachers of Ontario and the Aylmer-Malahide Museum. Friends may call at the H.A. Kebbel Funeral Home, Aylmer on Tuesday from 2:00-3:00pm, followed by the funeral service at 3:00pm. Donations to St. Paul’s United Church or Terrace Lodge Auxiliary would be appreciated.  Shared memories or condolences at kebbelfuneralhome.com

“Heather Johnson (cousin) wishes to thank the staff of Aylmer Retirement Home and Chartwell Aylmer for their loving care and support they gave to Grace.”

Share Your Memory of
Grace
Upload Your Memory View All Memories
Be the first to upload a memory!
Share A Memory