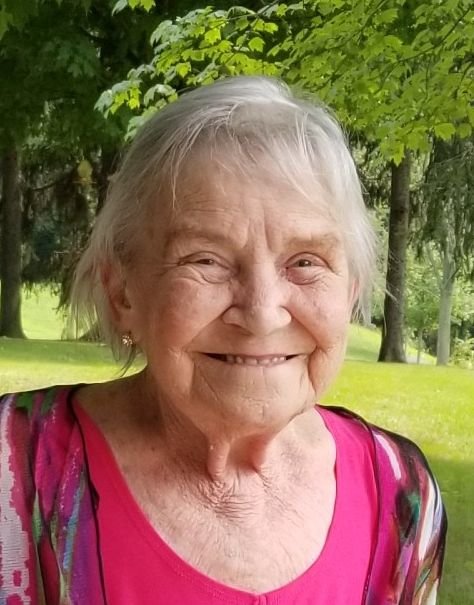 Phillips, Roberta Marie (nee Murphy) formerly of Aylmer passed away peacefully in Calton with family by her side on Saturday, September 7, 2019. She was 78. Beloved wife of the late Harold Phillips(2012). Dear mother of Tracey Davies(Rob) of Calton and Step-Mother of Michelle Gregorio(Nelson) of Salford. Mother-in-law of Sharon Phillips (London). Loved by her grandchildren Veronica(Steve), Jacqueline(Neil), Bobby(Kayla), Mackenzie, Courtney, Steven(Ciara), Nicholas, Anissa, Paul, Ashley(Mike), Brandy and Michelle(Joe). Sister of Dwain Murphy(Janice), Gary Murphy(Sharon), Esther Wiley(Neil), Danny Murphy(Beverly), Rhonda Cutler(Wayne) and Clifford Murphy. Sister-in-law to Donna Murphy and Rea Murphy. Also survived by a number of great-grandchildren, nieces and nephews. Predeceased by her son Larry(2011) and Step-Son Graham(2019), brothers Gordon and George Murphy.  Born in St. Thomas, Ontario on July 3, 1941, daughter of the late Ernie and Eva (Simmons) Murphy. Roberta lived many years on Caverly Road in Aylmer. Friends may call at the  H. A. Kebbel Funeral Home, Aylmer on Monday 2-4 and 7-9 p.m. where the funeral service will be held on Tuesday, September 10, 2019 at 11:00 am. Interment, Calton Cemetery. Donations to the Aylmer Kinsmen Club or the Lung Assoc. would be appreciated. Share memories or condolences at kebbelfuneralhome.com

Share Your Memory of
Roberta
Upload Your Memory View All Memories
Be the first to upload a memory!
Share A Memory
Send Flowers