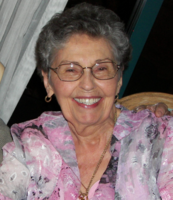 Skaftfeld, Shirley Helen (nee House)
Always the hopeless romantic, Shirley has reunited with her husband and best friend of 56 years Glen (2010) just after Christmas, two days shy of her 92nd birthday. Shirley passed peacefully in her sleep at Burloak LTC in Oakville, Ontario, and will be dearly missed by her family Glenann Skaftfeld Vincent, Geoffrey and Karen Skaftfeld, granddaughters Kristin (Nolan), Danielle (Greg), Kaitlyn (Anthony), and Rebecca, and great grandsons Theo and Max. Daughter of Nelson and Martha House, Shirley was predeceased by her two brothers Kenneth (June) and Howard House. Raised in Preston, Shirley completed her nursing training at Hamilton General Hospital, later finishing her nursing career at Tillsonburg District Memorial Hospital. Shirley was active in the Aylmer, Ontario community and volunteered in a number of programs, including Corner Cupboard, Meals on Wheels and the Canadian Cancer Society, and was a faithful member of St Paul’s United Church. Over the years, she and Glen loved their Toronto Blue Jays, and spending time with their family and granddaughters. More recently, nothing brought Shirley greater joy than becoming a great grandmother to Theo and Max. Lovingly remembered by the Henderson, Smith and House families, as well as numerous cousins, nieces and nephews. A celebration of Shirley’s life will be held at a later date. In lieu of flowers, a donation to the Heart and Stroke Foundation would be preferred.