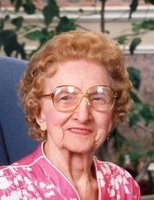 Vandewyngaerde, peacefully in her sleep at Maple Manor, Tillsonburg on Thursday, October 20, 2005.Alice Jeanne Vandewyngaerde of Tillsonburg and formerly Aylmer in her 102nd year. Beloved wife of the late Maurice Vandewyngaerde(1985). She is survived by her only daughter Dorothy Plyson of Tillsonburg, two grandchildren Alan and Janice, four great grandchildren and one great great grandchild which made five generations in 2004. Dear sister-in-law of Anna Vandewyngaerde. Mother-in-law to Morris Plyson. Predeceased by three brothers and two sisters. Born in Roeselaere Belgium on January 21, 1904. She was a member of Our Lady of Sorrows Roman Catholic Church. Friends may call at the H. A. Kebbel Funeral Home, Aylmer on Friday 2-4 and 7-9 p.m. where the funeral service will be held at the funeral home on Saturday, October 22, 2005 at 10:30 am. Interment, Queen of Peace Cemetery.